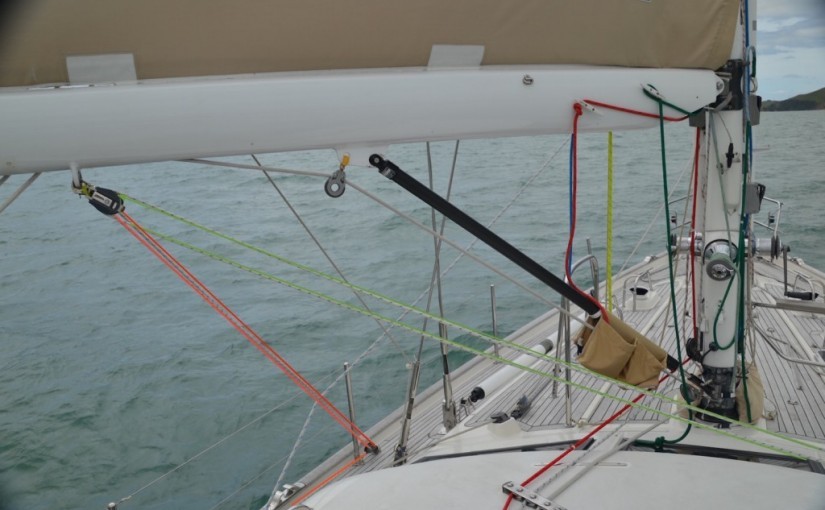 – A life vest and harness with short lanyards for every crew member to prevent anyone going overboard in the first place. When that happens getting someone back on board will cause a major headache even when the casualty is conscious and  attached to the yacht. Hence earlier mentioned short lanyards. Rig the jack stays as much inboard as possible. 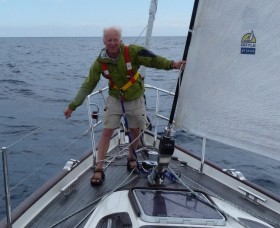 The short lanyard keeps you inside the guard rails

– 2 Life buoys both equipped with drogues to stop them from drifting away and one should have a high power strobe light for night search and the other one a high visibility float such as a stick with a flag.

– A Jon Buoy or a Lifesling to improve the chances of retrieving a MOB.

– A Rescue Throw Rope in a bag is worth having lashed somewhere on the aft guard rails to assist a conscious person in a less serious situation.

Any yacht over 45 feet up to 75 foot has the legal obligation to carry at least:

– 4 Fire extinguishers in a easy to reach location even in case of fire and a  fire blanket somewhere close to the galley.
This doesn’t mean that yachts under 45 feet can do without.
Fires are classed in 3 classes depending on the source. Class A for solid combustibles, Class B for liquids and class C for electrical equipment. On board a yacht all sources of flammables are in attendance, in particular in the engine room and in the galley. A runaway battery can easily cause an electrical fire in the battery storage sometimes caused by a charging problem in a marina.
Most fire extinguishers are of the powder type usable for all classes. Be aware that powder, after doing its job still has the capability to ruin your equipment. Especially the engine. A running engine sucks in the powder that when in contact with moisture becomes very corrosive and will attack the inside of the cylinders. Stop the engine before fighting an engine room fire with a powder extinguisher.

– A fire blanket is the simplest form of an extinguisher since all fires need oxygen and the blanket deprives the fire of oxygen.

– An automatic extinguisher filled with a clean Halon replacement gas such as FM200, FM36, Halotron or Novec should be considered for the engine room. A 1 kg one would protect the engine room of most yachts. Although expensive it prevents the crew from opening the engine room to have a look thereby giving the fire a boost of oxygen.
Position every extinguisher where it can be reached at all times.

– A manual bilge pump with a long handle, the standard handles are far too short, usable in and from the cockpit.

– An electric automatic bilge pump and located as low as possible in the bilge. Centrifugal pumps have the highest capacity, can run dry but are not self priming so need to be covered in water to work. They have a built in on/off switch. Impeller pumps are self priming but cannot run dry thus need to be in water contact when running. When above water level they need to be installed in a swan neck always filled with water.  Membrane pumps are self priming and can run dry but have very a limited capacity and are not useful as bilge pump.
Any bilge pump should be hard wired to the house battery bank so that it will work with all electrics shut off. Even a yacht in dry-storage needs this since rain water will eventually fill the bilge.

It goes without saying that one should never abandon a yacht unless it is sinking from under your feet. Any yacht is more stable and comfortable and gives better chances of survival than a life raft.

– A life raft capable of accommodating the whole crew plus survival gear such as extra water and food. It should be stowed easily accessible and self releasing in case of a capsize. For ocean going racers it is compulsory to have a valid service certificate not older than one year. For cruisers that is not manageable simply because in many remote places there are no service stations. My new vacuum sealed life raft was first inspected after 5 years and replaced with many apologies with a new one. During the test the raft fell apart because the glue was not holding the raft tubes together. Red faces of course and apologies from the manufacturer.

– A grab bag to go with the life raft. This bag to contain materials to make a short stay afloat less of an survival struggle, such as foil blankets, extra water and some food,first aid materials,  torches,  etc. Copies of passports in a sealed plastic bag could be very useful if not the passports themselves.

– An EPIRB 406 and a watertight handheld VHF to assist rescuers. Flairs and strobe lights would also be useful in night searches and smoke signals for day searches.
see also Emergency procedures

Epirb stands for Emergency Position Indicating Radio Beacon. A 406 MHz transmitter sits inside a watertight floating box and is programmed to do what its name implies. The previous generation of 121.5 and 243 MHz analog beacons are no longer monitored and fazed out. The current 406 MHz beacons need to be registered with the relevant authority in the country of registry of the yacht. When activated the 406 MHz beacon transmits digitally relevant information to passing polar orbiting satellites. Transmission starts immediately after activation and thereafter every 50 seconds a string of information is send out for at least 24 hours up to 48 hours. A possible delay of up to a few hours in reception depends on the passing over of a satellite. Armed with the ID info of the beacon and its approximate location, within a radius of 3 miles, a Search and Rescue operation starts with verifying if the emergency signal is real or is false by contacting the people recorded on the registration form. When an emergency is real a rescue operation will start within a short time through a local RCC or Rescue Coordination Center.
Some more expensive 406 MHz Epirbs are equipped with GPS which gives a precise location and some are also equipped with the old 121,5 MHz analog transmitter which can be used to home in on the beacon when rescue services are close. A fitted high intensity strobe also helps finding the emergency location. Battery shelf life is appr. 5 years
www.epirb.com 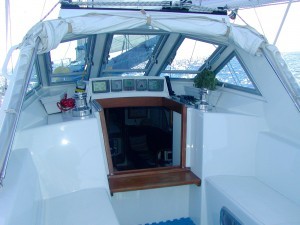 An epirb should be in a readily approachable location when at sea. Here to port of the instrument panel in the cockpit.

Not strictly a piece of safety equipment but very useful to prevent emergencies and enhance safety for a small crew and certainly for single handers a must have.

AIS is short for Automatic Identification System. This system can be incorporated in the navigation setup or can be installed as a stand alone.
The system is compulsory for ocean going vessels over 300 tons and sends and receives over VHF navigational data such as position, direction and speed of ships in VHF range. With this information the receiving end calculates if a collision or close encounter with the sending side is likely in which case it will give an audible alarm and shows on a screen which vessel is the culprit. For yachts there is a system available that only transmits but I advise to have one that receives as well as transmits otherwise you don’t get the alarm yourself. It is always reassuring to sea ships altering course for a yacht and when that does not happen you can call the ship by name which makes it less likely that you will be ignored!

– Gas alarm that sounds or, even better, one that closes the regulator on the propane cylinder when an explosive concentration of (LPG) gas is in the early stages of building up.

– Test equipment as simple as a hand spray bottle with soapy water to test a newly fitted LPG cylinder.

– A carbon monoxide alarm would be sensible certainly in case of an open fire heating system.

From water ski to super tanker no vessel is safe from a possible lightning strike. Unfortunately there are no systems or products that can protect against or prevent a lightning strike.
To minimize damage caused by a lightning strike a yacht should be equipped with a low resistance path between the strike entry point, most likely the top of the mast and the sea. A sharp pointed stick on top of the mast above the wind instruments should provide the entry point for the strike. Quite often the VHF antenna. A good heavy connection between the keel stepped mast and the keel(bolts) should be the exit point. But even with good grounding there is a potential for damage from side flashes or electromagnetic pulses to electronic equipment vulnerable to even small voltage changes. On an all metal yacht the discharge current will travel unhindered to the sea. On a GRP yacht the charge will travel down the aluminium mast and should exit there to the sea via a capable low resistance path to the keel bolts and the keel.
Without a low resistance path between foot of the mast and the keel the charge will force itself right through the hull.

When sailing downwind in a following sea it is necessary to prevent the boom from mowing the crew off the deck when accidentally gybing. The way to do this is not always safe. Mostly a line is rigged from the end of the boom to the bow running outside the rigging. This line needs to be rigged every time after a gybe whereby during the gybe the boom is free to swing from side to side. Clever cloggies have rigged a block on the bow with a line back to the cockpit and two lines one on either side of the boom. One of the boom lines is tied to the bow line and the boom can now be controlled from the cockpit. An accidental gybe keeps the boom in place and when normally gybing one releases the the bow line from the cockpit and let the boom go over. Then one crew member steps out unties the boom line and ties the other now leeward boom line onto the bow line. Safe but not very safe when that happens at night.

A system that doesn’t require leaving the cockpit has two preventer lines either side of the yacht somewhere mid boom via blocks at the base of the shrouds to the cockpit. This system prevents not just an accidental gybe but also gives control over the boom during a gybe. 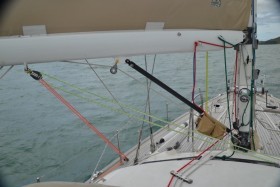 The port preventer in red is tensioned and the green starboard preventer is awaiting its turn.
The attachment on the boom should be as far aft as possible without interfering with a genoa sheet. The block on deck as far forward as possible.

The advantage of this system is that the boom can be controlled during the gybe but also one can steady the boom upwind in light airs in a choppy sea. The boom can in fact be stabilized under all conditions. The negative side is that the attachment point halfway the boom requires a tackle and a winch in the cockpit to handle the power. Also the boom needs to be substantial.