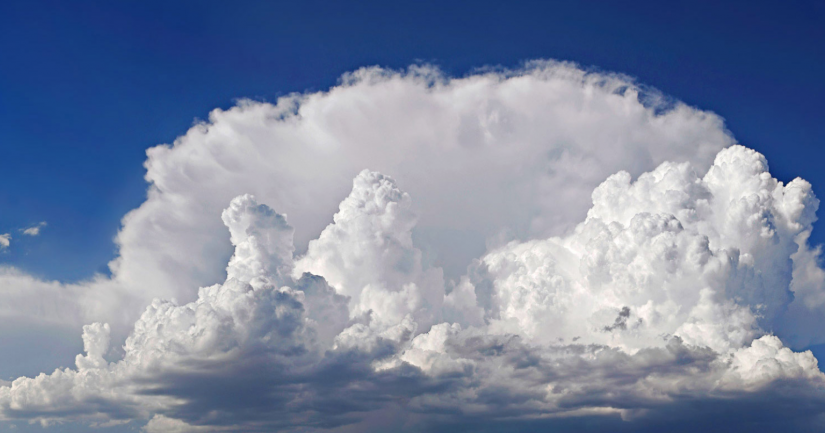 Emergency management; the “what if….” question

This question, what do I do when this or that happens …. should always be on the mind of the prudent sailor. For example:

The only good thing is it won’t come as a bolt out of the blue. High towering built-up clouds, thunder in the distance and coming closer warn you.
You have some time to prepare.

When an electrical discharge between a thunder-cloud and the strike point on earth takes place a very high electrical current follows a path of least resistance between the cloud and the earth.
Anything that puts up the slightest resistance gets heated up and potentially will be destroyed.
The highest point of the mast, most often the VHF antenna is likely to be the strike point from where the discharge current travels down to the sea.

In a best case scenario on an all metal yacht the charge will quickly dissipate into the sea since metal doesn’t put up much resistance.
As long as crew members stay inside the yacht, wear dry rubber boots and do not touch the mast, shrouds, the helm or the controls of the engine when the lightning strikes not much damage will be done apart from a ruined antenna at the point of entry and some paint damage at the point of exit i.e. the metal hull.

In a worst case scenario on a GRP yacht with an aluminium mast the charge may travel down the mast to the hull and exit there to the sea leaving a hole in the bottom when there is no low resistance path capable to transfer the charge to the keel bolts and the keel and on into the sea.
It is essential to have a low resistance connection between the foot of the mast and the sea via the keel bolts and the keel. Ask the builder.

Protection against a strike?
Unfortunately there is no scientific evidence of systems or products that can protect against a lightning strike. The only way to avoid a strike is not being part of the strike channel between the cloud and the earth or even close to it. 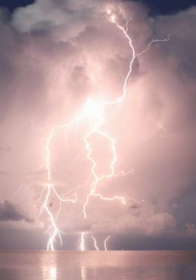 To minimize damage in case of a strike it is essential to provide a low resistance path to the sea. Some sailors take an extra precaution and carry heavy-duty SS wires to clip to the shrouds and dangle them into the sea creating an extra low resistance path for the discharge. This sounds a good idea but experiments have not been done to my knowledge. Also don’t get hit whilst clipping the wires onto the stays.
Even with good grounding there is a potential for damage from side flashes or electro-magnetic pulses (EMPs) to electronic equipment.
– Unplug all electronic equipment from the DC power source and antennas and other connecting cables. Switching off is not enough. A good distance between plug and instrument gives a better protection against side flashes.
– Put all small electronic instruments such as smartphones, iPads, computers etc. in the (micro wave) oven or a sturdy aluminium case or wrap with aluminium foil to make a cage of Faraday. Modern diesel engines have electronic parts so isolate the engine as well.
– Use the radar to monitor a thunder-cloud, assess the direction and speed of travel and try to avoid getting too close.
In any case after a hit, even when nothing noteworthy seems to have happened, have the yacht hauled out and inspect all through hull fittings and above fittings, rigging and apertures for damage.

Abandoning ship should only be contemplated when your yacht sinks from under you because you will leave a relatively stable platform with supplies for an insecure shaky survival experience without any comfort or very limited supplies in a life raft. For that purpose one needs to carry a life raft capable of accommodating the whole crew plus survival gear such as extra water and food, blanket foil. etc. A watertight plastic bag box containing (copies of) passports. ships papers, wallets with credit cards etc.
To minimize the time in a raft one must take and activate the EPIRB 406 together with a watertight handheld VHF to assist rescuers or alert passing ships within range. Flares and strobe lights would also be useful in night searches and smoke and dye signals for day searches. Only to be used when rescuers are close enough to see them.

Man over board is a situation one needs to avoid at all cost.
– Sturdy at least 70 cm high guard rails and strict rules about wearing a life harness and clipping on when the conditions are less than ideal.
– Male crew members never to pee over the side most certainly not at night.
– Always rig a boom preventer when sailing downwind.

There are too many different scenarios for a MOB situation to give a manual.
Every crew member, not just the skipper, needs to think beforehand about how to handle such a situation and work out a plan.
– First of all it is essential not to lose the victim out of sight.
– If possible give one crew members this important task.
– Throw immediately flotation material to keep the victim afloat and assist recovery. A life buoy with a drogue to stop it from floating down wind out of reach of the casualty. Better still release the Jon Buoy to give the victim a private raft.
– Stay within sight of the victim possibly by crash tacking, This is a tack without releasing the jib sheet so that all speed is killed. Even sailing downwind just crash into the wind to stop. It may cost a spinnaker but so what..
– Don’t try to sail towards a victim unless you have a very small yacht and a calm sea.
– Start the engine without engaging the propeller,
– Take mainsail down,
– Fix the boom so that no one gets knocked over board as well.
– Then roll up or pull down the headsails,
– Check if lines are in the water before motoring towards the victim. At this stage all crew members should wear a life harness as no one is to go overboard to add to the emergency.
– Deploy whatever means you have to heave the casualty back on board. A life sling would be invaluable on board a yacht.

Don’t let it happen.
It will be near impossible to recover an unconscious person even assuming wearing a life jacket. The best place would be alongside and underneath the guard rail,
Don’t try the stern since in even the slightest sea way the stern will act as a hammer knocking even a conscious person out. Also the propeller will be too close although the engine will be disengaged at that stage.
This is where a Life sling or a Jon buoy could be invaluable. Have one on board. A short-handed crew, meaning 1 person left on board, trying to get an unconscious casualty back on board will find this impossible. So don’t let it happen.

There are many different possible failures so too many different scenarios to combat rudder failure to describe. One thing is important. Be prepared and stay cool because you will have to stay a lot longer than anticipated en route and even might run out of supplies if the failure is more serious than a net or a line in the rudder or broken steering cables.
Even when there is a failure in the steering system or the rudder itself one is not in immediate danger and you can communicate with fellow sailors who might be able to help.
First of all balance the sails to make the yacht steer a more or less stable course. Down wind that would mean only headsails boomed out and the tiniest bit of mainsail. On an upwind course a bit more mainsail together with a genoa. A cutter rig or an inner head sail has an advantage here. Failing that heave to with a securely fixed boom so that nobody gets knocked over the side.
A drogue. It seems possible to steer the yacht by deploying at short distance behind a drogue on a bridle running from one side to the other side of the stern. This drogue could be a bucket or anything giving a drag. A bigger drogue will result in better steering but also less speed. The wider apart the steering lines the better. This could be achieved by using a spinnaker pole lashed across the stern with blocks at each end through which the bridle lines go to the winches or even to the steering wheel.

A jury rudder. Another method could be rigging a jury rudder using a spinnaker pole onto which a piece of plywood is lashed. This piece of plywood needs a few holes drilled into it preferably done before the start of the journey. A row of holes above and below the middle line for lashing the board to the pole. Two pairs of holes for the short bridles to the steering lines and one hole in the top for a lift. For the bridle lines one would need pairs of holes on the top and the bottom side of the plywood to prevent swiveling over when one pulls with the steering line the pole to one side. Don’t use the spinnaker pole as a helm, it would be too short, but attach it to a strong point at the stern or lash it to the base of the push pit. Attach a lift and then stick the whole contraption through the push pit and lash the pole to somewhere strong. Have a safety line attached to prevent losing it all whilst rigging it. Be prepared to do some more adjustments before it will work.
Do the steering with lines either side attached to the bridles on the plywood board. This should be reasonably effective with a pole sticking a bit aft giving good leverage even with a small piece of wood. The further the steering lines apart the more effective.

Have a pre-drilled piece of plywood preferably with the 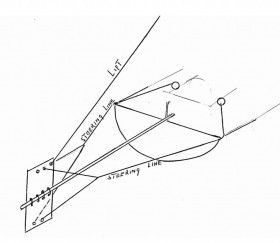 Fire fighting is an area for professionals who put fires in categories.
A for solid materials,
B for flammable liquids, and
C for electric fires.

Powder extinguishers can handle A,B and C class fires. Very few yachties have much expertise but luckily the area is small and oversee-able and a fire is mostly, but not always, very likely discovered in the early stages.

A galley fire should be smothered with a fire blanket to starve it from oxygen after switching off the igniting heat source and the fuel supply such as gas or methanol.

The engine room is another likely place for a fire. Do not open the engine room when smoke comes out and you expect a fire as easy access of oxygen will only make matters worse.
– Switch off the engine and the electrics. Do not use a powder extinguisher on a running engine if avoidable. The powder will get into the air intake and ruin your engine from the inside. Powder gets sticky when heated up and becomes very corrosive when afterwards exposed to water vapour in the air. If all you have is powder extinguishers then shut off the engine before smothering the fire with the powder.
– Ideally one should have installed an automatic fire extinguisher loaded with a clean Halon replacement such as FM35 or FM200 or FE36. If a fire becomes uncontrollable then you need to think of abandoning ship using the life raft and or the dinghy.