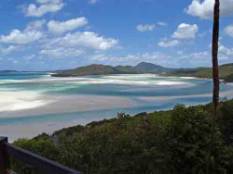 Whitsunday cruising continued to be a relaxed affair and quite different from other South Pacific islands. First noticeable difference is that there are no locals paddling out to the yachts in their dugouts to exchange fruit for T-shirts. Secondly the anchorages are packed with bare boat and backpacker charter boats.

The backpacker boats are all ex round the world race yachts, sparsely fitted out hulls that squeeze 20 paying guests and 5 crew on an 80 footer for a two-day sailing package. We spent a couple of days at Airlie Beach marina along side one as the crew were preparing for the next shift of punters. We had just dashed across the bay in 35 odd knots of wind and they were about to set off with a new compliment of punters. They routinely use a high-pressure hose to clean the boat inside and out. A line of young people assembles on the dock, each with a tiny backpack and the obligatory bottle of water. Not one of them looks as though they are thrilled at the prospect of setting off for a great adventure, a trip of a lifetime experience. No, they just look resigned and slightly bored as if an overnight sailing adventure in the magical Whitsunday’s is something to be endured and ticked off the list of things-to-be-done rather than something that they actually want to do. One of the places on the itinerary is the spectacular Hill Inlet, picture above.

However it is the bare boats that provide the cruising community with daily entertainment particularly around teatime when they all have to be at anchor. First to arrive are the macho guys who roar into the anchorage at high speed kicking up waves, upsetting dinks and scattering children in canoes all over the place. If there is a mooring free they make a direct beeline for it, cutting the revs only at the very last minute. The bikini clad blond on the foredeck waves the boat hook in the general direction of the buoy and either misses the pickup entirely, or grabs it only to find the boat is going at such a speed that both boat hook and line are wrenched out of her hand. This is when the shouting from the back end of the boat begins and curses are exchanged to and fro. In the meantime no one notices that the pickup line and buoy are now under the boat and are firmly attached by the propeller, the boat hook is floating free.

The late arrivals turn up and as there are no mooring buoys left they are forced to anchor. The normal practice is that they aim for a space, no circling around just stop, sling the anchor over the bow with a heap of chain before retiring to the back of the boat to open the chilly bin and grab a beer. However if they make the mistake of anchoring on top of us we have a very cunning trick. Just as they are in the process of dropping the anchor at a distance that we consider far too close for comfort, we start the engine and just engage the prop. One of us positions ourselves under the dodger and uses the pilot to steer Duet ever so slowly towards the offending boat. At this point the hapless charter crew notices a blunt aluminium bow and two very polite people with folded arms staring at them. They get the message without a word spoken. 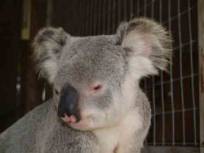 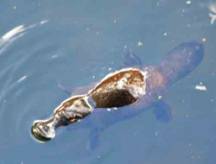 We spent 2 months enjoying all the Whitsunday’s have to offer, lovely anchorages, good walking tracks and some of the best snorkeling we have had for a long time. Now we are trying to get south to Bundaberg with the winds stubbornly remaining in the SES direction and plenty of it. We took ourselves off for a couple of days watching Australia’s beguiling mammals — the duck billed Platypus and not forgetting the cuddly Koala.

The weather is supposed to change around this time of year and produce the northly winds to help us go south. Like most of these weather predictions it’s about as reliable as Madam Zola’s horoscope. We bashed our way from Mackay down to Bundaberg, 321 nm. We had a two day window with light ESE winds which we made the most of and 58 hours later we arrived just as the wind began to howl out of the SE. The entrance to Port Bundaberg couldn’t be easier, it is as well lit as a flight approach at a major international airport. Not according to one cruiser we spoke to on the dock who found it very difficult as the lights kept on turning off!