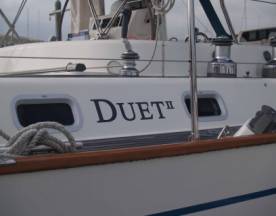 Christmas isn’t Christmas without stress! Simon had gone back to New Zealand ahead of me to oversee and install the new radar and wind instrumentation. The original equipment being 10 years old and was in need of an update.

We were fortunate to have been handed over Shear Madness, as she was called then, by her very well organized owners who had made not only a diagram and list of every singe locker and stowage space on board, but also a list of contents. Our first task was to go through the boat, discover where all 98 spaces as well as to familiarize ourselves with the layout.

I arrived three weeks later to find that Simon had to leave the next day for Sydney as there was a potential buyer for “little” Duet. The day after he left, 18 packing cases arrived from Sydney with the contents of the old boat. Duet II now looked like a vessel involved with the retreat from Dunkerque!

Unpacking is an endless, nail breaking job. There is nothing so mind concentrating as having a deadline. Ours was a party in Auckland which we had to go to. This would be our maiden voyage of some 12 miles! Heading South to Auckland city was downwind so we tried out the headsails only. How easy it all is with electric winches. The return sail there was a decent breeze so for the first time we pried off the mainsail cover. We had a splendid sail Duet slid through the water at an easy 9.5 knots. We are going to look forward to so terrific passages in this boat. 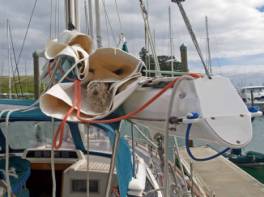 On our return to Gulf harbour we were packing away the mainsail to find that in the after end, undisturbed as we’d had the reef in, a birds nest.

We carefully removed it to find three eggs still intact. We don’t know for sure what kind of bird, but I think it might have been a thrush.

Today we going to head up North to the Bay of Islands where we are going to spend Christmas, but the rain is coming down in buckets. The wind is in the right direction so we will wait for it to clear before we set off. Our first anchorage will be fun! 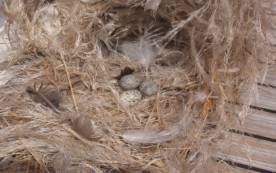