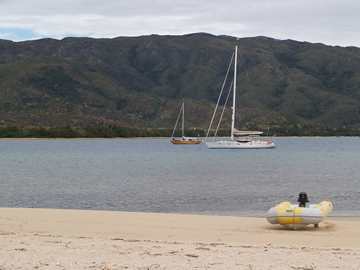 Captain James Cook on this sand spit a mile from the shore on 5th September 1774 to observe the eclipse of the sun and named it Observation Island. Bruni d’Entrecasteaux sailed his expedition ship here in 1793. They based themselves on the mainland where Huon was taken ill and died. They had observed that the soil was barren and the local people were half starved and very poor. On this sand bank, aka Observation Island is a headstone as this was where he was buried. Why was he not buried on the main land? He didn’t want his body to be eaten by the locals.

This was where we met up with friends, Vicky and Tom on Sunstone. Vicky’s middle name is D’Entrecastaux. She was on a mission to visit as many of the places that the famous surveyor and explorer bear his name as possible.