Not much has changed in the last 238 years since Captain James Cook landed here, replenished Resolution with water and dined off crayfish. Instead of Maori paddling their wakas there are only to be found the occasional kayaker making their way around the sounds. If it weren’t for Marie of Bluff fisherman’s radio we would really feel as though we were back in the 18th Century.

Marie has a roll call each night and every vessel checks in giving information on weather and if they have seen anyone else. Requests from boaties for anything from spare parts to a box of groceries or even plane tickets all relayed to Marie who passes on messages and arranges everything else. We haven’t seen any yachts or fishing boats for the last three days although we know that there are 20 vessels scattered around an area roughly the size of Wales. 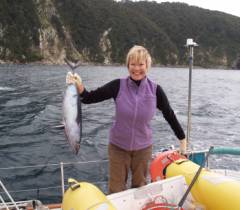 What is there to do all day? Fish. It’s not too challenging either. Simply chuck your line over the side and within a minute haul in a big blue cod. After the initial excitement of catching my

first and even the second fish I have become increasingly blasé and only bother when we feel like lunch. I’m also running out of ways of cooking them. 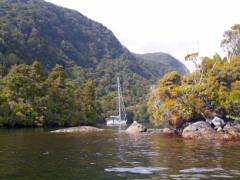 What’s the weather? Four seasons in a day is the cliché and it’s not wrong. When the rain stops the waterfalls begin it’s like a tap being turned on and off. The fiords are deep and mysterious; the bush thick and impenetrable. Anchoring is difficult, the holding in general poor and much work needed with lines ashore to trees to secure yourself.