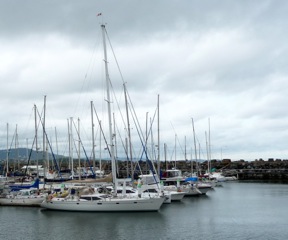 Overseas yachts used to be able to clear customs in Scarsdale marina, no longer they have to go up the river to clear in and out at Rivergate marina. few years backcustoms would visit incoming yachts at Scarsdale. The currents in the marina are strong and particularly at the moment as they had opened the sluice gates further up stream due to all the flooding. The river was filthy, full of trees, branches and a lot more, the stink was dreadful. 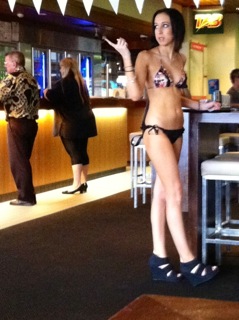 The dinghy we loaded into a Ute and drove down to Southport to where the manufacturers were. They put it on test for us whilst we went spent the afternoon looking at the horrors of the gold coast, more like an Australian las vegas. Then Simon found a bar with a very decorative waitress.

Dinghy sorted and people very friendly and helpful.
So then it was off to stay with friends in their apartment and to visit the Matisse Drawing life. 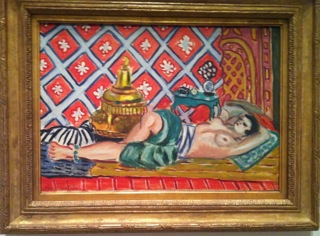 It was a glorious exhibition concentrating mainly on his drawings. Blissfully easy to walk around as it was not over crammed with visitors like you get at the big block -buster shows in London.

The weather looked as though it was going to be light from the south south east for day after day, so we set off south hoping that we would pick up the southeastern Australian current which would help us get further south. It didn’t appear until we were within about 50 miles of Coffs Harbour. We snuck in during the night and tied up alongside. It is not a particularly beautiful place but there are no places to stop on route. Next stop will be – well who knows, we may go down to Port Stephens, Sydney, actually I fancy going to Sydney as there is a big Picasso exhibition.